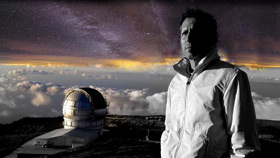 Isidro Castro is a multidisciplinary plastic artist graduated in Fine Arts by the University of La Laguna, Tenerife (Canary Islands) Spain that combines his pictoric work with electronic music composition and performance. He started his musical activity in 2005 immersed in the electronic music scene of the Berlin School and has been deeply influenced by artists like Tangerine Dream, Klaus Schulze, Ashra Temple, Michael Hoenig for more than 25 years. This makes Isidro’s music an awesome equilibrium between atmospheric soundscapes, electronic sequences and minimalist structures with a wide range of elements.

He considers that his main inspiration sources come from natural energies such as those originated from the telluric force related to the volcanic and desert landscapes of the island where he lives in as well as those coming from icy and even astronomic worlds, that contribute to strengthen the construction of a thought that expresses his feelings through two languages: music and plastic arts.